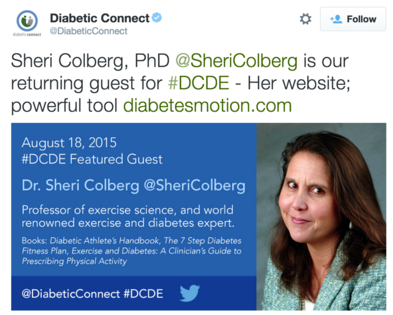 I recently received an email from a person with type 1 diabetes living in Denmark (Guido) whose physician believes in prescribing many medications to manage cholesterol and high blood pressure in anyone with diabetes, regardless of need. Guido has been taking a statin (Atorvastatin, brand name Lipitor), along with at least four others for blood pressure control. He used to take Simvastitin (Zocor), but a year prior had been changed to Atorvastatin (and his dose doubled). That’s when his problems with exercise began.

Many prescribed medications can directly affect people’s ability to exercise or their responses to it, but most healthcare providers focus on the ones that affect blood glucose, particularly if they increase the risk of activity-related hypoglycemia. Another type really needs to be considered, though, because of the sheer number of patients who are being put on them and their potentially negative impact on the ability to exercise: statins. Statins are medications taken to treat high cholesterol levels or abnormal levels of blood fats, in an attempt to lower the risk of heart attack and stroke. Brand name examples include Altoprev, Crestor, Lescol, Lipitor, Livalo, Mevacor, Pravachol, and Zocor.

The cholesterol guidelines were recently updated, the result being that even more adults with diabetes and prediabetes are being prescribed various medications from this class. In individuals who are unwilling or unable to change their diet and lifestyles sufficiently or have genetically high levels of blood lipids, the benefits of statins for lowering cardiovascular risk likely greatly exceed the risks, or so the experts claim (1). If a person has a low risk for developing cardiovascular problems and does not already have type 2 diabetes, taking them is not advised (2), particularly because many statins increase the risk of developing type 2 diabetes (3).

Since one month after he started taking Atorvastatin, Guido confided that has been suffering from extreme stiffness and pain in his legs that occurs after running any distance (3 km or 20 km). The pain is in his lower leg/ankle (the right one hurts more, but the left leg is also very stiff) and occurs typically after his runs and decreases after 3 to 4 days, during which time he is unable to run at all. His legs have been scanned and are negative for any signs of fractures or inflammation, and they have ruled out compartment syndrome.

In his email to me, Guido stated: “I suspect it is the Atorvastitin. What do you think?”

My answer was, “I completely agree that your problems are probably coming from the Atorvastatin. As a group of medications, the statins are WELL known for causing muscle and joint issues. I would suggest considering going off of it completely and see if your symptoms resolve in a few weeks.”

Guess what? It worked! He emailed me a week later, stating “I have stopped using the Statins now for 5 days and after a 12 km run my legs feel completely different and back to normal.” That was great news to hear!

It’s not talked about enough, but undesirable muscular effects from statin use are commonplace, such as unexplained muscle pain and weakness with physical activity that Guido has been having, which may be related to statins compromising the ability of the muscles to generate energy. The occurrence of muscular conditions like myalgia, mild myositis, severe myositis, and rhabdomyolysis, although relatively rare, is doubled in people with diabetes (4). Others have reported an increased susceptibility to exercise-induced muscle injury when taking statins, particularly active, older individuals (5). Other symptoms, such as muscle cramps during or after exercise, nocturnal cramping, and general fatigue, generally resolve when people stop taking them. If people experience any of these symptoms, they need to talk with their healthcare provider about switching to another cholesterol-lowering drug that may not cause them.

Another major issue related to statins is that their long-term use negatively impacts the organization of collagen and decreases the biomechanical strength of the tendons, making them more predisposed to ruptures. Statin users experience more spontaneous ruptures of both their biceps and Achilles tendons (6-8); I personally know a physically active person with type 1 diabetes that simultaneously ruptured both of his Achilles tendons during a routine workout due to long-term statin use. Again, people should talk with their doctors about whether it may be possible to manage their cardiovascular risk and lipid levels without taking statins long-term for this reason and the aforementioned ones.

In my opinion, there’s nothing worse than a medication that is supposed to help lower your cardiovascular risk, but then likely ends up removing all of the potential benefits by taking away your ability to be physically active! Likely the greatest risk factor for heart disease is physical inactivity, so don’t prescribe statins that make people sit on the couch. At least have them try another medication to see if it a lesser negative impact on being active.

As a leading expert on diabetes and exercise, I recently put my extensive knowledge to use in founding a new information web site called Diabetes Motion (www.diabetesmotion.com), the mission of which is to provide practical guidance about blood glucose management to anyone who wants or needs to be active with diabetes as an added variable. Please visit that site and my own (www.shericolberg.com) for more useful information about being active with diabetes.
by Dr. Sheri Colberg, Ph.D., FACSM Diabetes in Control April 2 2016