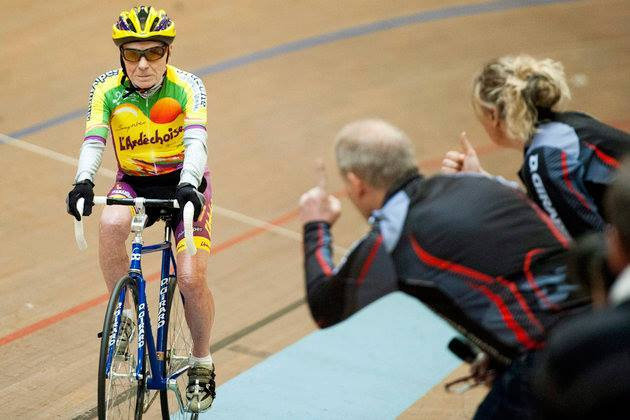 At the age of 105, the French amateur cyclist and world-record holder Robert Marchand is more aerobically fit than most 50-year-olds — and appears to be getting even fitter as he ages, according to a revelatory new study of his physiology.

The study, which appeared in December in The Journal of Applied Physiology, may help to rewrite scientific expectations of how our bodies age and what is possible for any of us athletically, no matter how old we are.

Many people first heard of Mr. Marchand last month, when he set a world record in one-hour cycling, an event in which someone rides as many miles as possible on an indoor track in 60 minutes.

Mr. Marchand pedaled more than 14 miles, setting a global benchmark for cyclists age 105 and older. That classification had to be created specifically to accommodate him. No one his age previously had attempted the record.

She was particularly interested in Mr. Marchand’s workout program and whether altering it might augment his endurance and increase his speed.

Conventional wisdom in exercise science suggests that it is very difficult to significantly add to aerobic fitness after middle age. In general, VO2 max, a measure of how well our bodies can use oxygen and the most widely accepted scientific indicator of fitness, begins to decline after about age 50, even if we frequently exercise.

But Dr. Billat had found that if older athletes exercised intensely, they could increase their VO2 max. She had never tested this method on a centenarian, however.

But Mr. Marchand was amenable. A diminutive 5 feet in height and weighing about 115 pounds, he said he had not exercised regularly during most of his working life as a truck driver, gardener, firefighter and lumberjack. But since his retirement, he had begun cycling most days of the week, either on an indoor trainer or the roads near his home in suburban Paris.

Almost all of this mileage was completed at a relatively leisurely pace.

Dr. Billat upended that routine. But first, she and her colleagues brought Mr. Marchand into the university’s human performance lab.

They tested his VO2 max, heart rate and other aspects of cardiorespiratory fitness. All were healthy and well above average for someone of his age. He also required no medications.

He then went out and set the one-hour world record for people 100 years and older, covering about 14 miles.

Afterward, Dr. Billat had him begin a new training regimen. Under this program, about 80 percent of his weekly workouts were performed at an easy intensity, the equivalent of a 12 or less on a scale of 1 to 20, with 20 being almost unbearably strenuous according to Mr. Marchand’s judgment. He did not use a heart rate monitor.

The other 20 percent of his workouts were performed at a difficult intensity of 15 or above on the same scale. For these, he was instructed to increase his pedaling frequency to between 70 and 90 revolutions per minute, compared to about 60 r.p.m. during the easy rides. (A cycling computer supplied this information.) The rides rarely lasted more than an hour.

Mr. Marchand followed this program for two years. Then he attempted to best his own one-hour track world record.

First, however, Dr. Billat and her colleagues remeasured all of the physiological markers they had tested two years before.

Mr. Marchand’s VO2 max was now about 13 percent higher than it had been before, she found, and comparable to the aerobic capacity of a healthy, average 50-year-old. He also had added to his pedaling power, increasing that measure by nearly 40 percent.

Unsurprisingly, his cycling performance subsequently also improved considerably. During his ensuing world record attempt, he pedaled for almost 17 miles, about three miles farther than he had covered during his first, record-setting ride.

These data strongly suggest that “we can improve VO2 max and performance at every age,” Dr. Billat says.

There are caveats, though. Mr. Marchand may be sui generis, with some lucky constellation of genes that have allowed him to live past 100 without debilities and to respond to training as robustly he does.

So his anecdotal success cannot tell us whether an 80/20 mix of easy and intense workouts is necessarily ideal or even advisable for the rest of us as we age. (Please consult your doctor before beginning or changing an exercise routine.)

Lifestyle may also matter. Mr. Marchand is “very optimistic and sociable,” Dr. Billat says, “with many friends,” and numerous studies suggest that strong social ties are linked to a longer life. His diet is also simple, focusing on yogurt, soup, cheese, chicken and a glass of red wine at dinner.

But for those of us who hope to age well, his example is inspiring and, Dr. Billat says, still incomplete. Disappointed with last month’s record-setting ride, he believes that he can improve his mileage, she says, and may try again, perhaps when he is 106.

3 thoughts on “Gretchen Reynolds: You are never too old to give up on exercise”