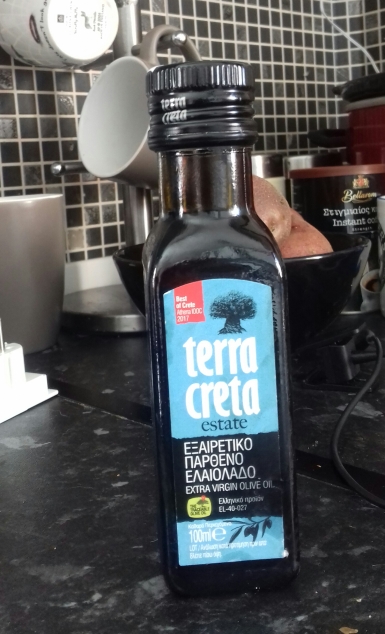 We’re just back from Crete and enthused with the joys of extra virgin olive oil (EVOO). Yes, readers, splash it everywhere with gay abandon just as the Cretans do.

The island’s average inhabitant consumes 36 litres of the stuff every year—more than any other nation in the world. Even the Italians, also fond of the EVOO, manage only ten litres of it and they are the third highest consumers.

Does it have implications for we sugar-challenged folks? The factory I visited while there had a sign claiming health benefits for sufferers of all kinds of things, including type 2 diabetes. The Cretans produce mainly EVOO (and they harvest the olives by hand rather than machine), and they don’t bother with the ‘rule’ that you only use it for salads or to dress vegetables. They stick it in marinades, cook with it and even use it to deep-fry chips.

In the Mediterranean region where olive oil is the main dietary fat, there are lower levels of deaths from cardiovascular disease. A Medicine News Today article also claimed positive benefits for stroke risk, breast cancer, liver protection, Alzheimer’s, ulcerative colitis, acute pancreatitis, maintenance of healthy cholesterol levels and even depression. [The article quoted from different studies, all of which used the words ‘appear to’.]

Anyone with diabetes has an increased risk of all the above conditions. The so-called Mediterranean ‘diet’ isn’t that dissimilar from the low-carb diet we promote. Broadly, eat tonnes of vegetables, some fruits preferably berries, plenty of fish, full-fat dairy, some beans and pulses if you can tolerate them and dress your salad and veggies with plenty of olive oil*.

Apart from the health benefits, a decent splash of EVOO does miraculous things. Steam some broccoli and then finish it off in the pan frying it with olive oil, thin slices of garlic and sea salt and you get to eat something that is three hundred times nicer than the boiled stuff.

And naturally a Greek salad needs the stuff… the best ones are simple. Large chunks of cucumber (peeled for purists) and tomatoes, black olives, thin slices of red onion and topped with a slab of feta cheese, plenty of salt and pepper and a generous drizzle of EVOO.

Sadly, because we’d opted for the hand luggage only flight, we could only bring back a 100ml bottle. One of the big issues with olive oil, and especially the extra virgin variety, is fraud. Most olive oil distribution is done through Italy, including the Cretan stuff. Investigations in recent years have uncovered wide-scale issues where virgin olive oil is passed off as extra virgin. There have even been cases where the oil was blended with sunflower oil and others..

The Guardian has a useful article that contains advice about buying genuine EVOO. Basically, it’s best to buy it in small quantities and if you think that stuff in supermarkets is too cheap to be the real thing, you’re probably right.

Meanwhile, if you’re looking for olive oil recipes here are some suggestions from our blog:

What’s your favourite olive oil recipe or use?

*If you are overweight, you might want to be a little more cautious with your use of it, as it is calorie dense.