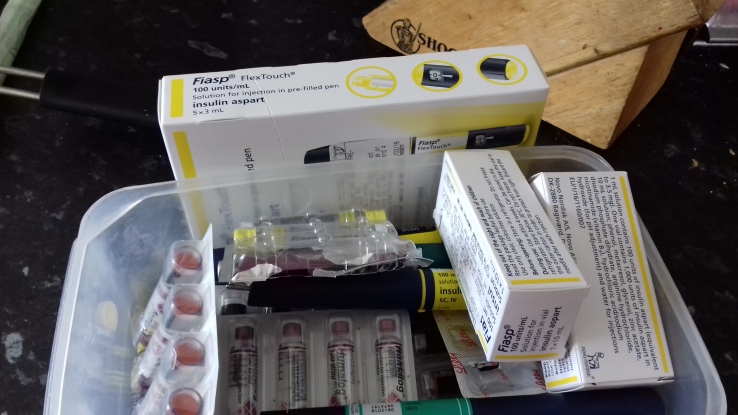 Insulin shortages and low-carb dishes—no obvious connection, I grant you but bear with me.

The first relates to a news item on Channel 4 last night, which warned of insulin shortages post-Brexit in the UK as the country produces little to no manufactured insulin (apart from a factory which makes the stuff derived from pigs).

Sir Michael Rawlins, the chair of the Medicines and Healthcare products Regulatory Agency, told the Pharmaceutical Journal last Friday that, “We make no insulin in the UK. We import every drop of it. You can’t transport insulin around ordinarily because it must be temperature-controlled. And there are 3.5 million people [with diabetes, some of whom] rely on insulin, not least the Prime Minister.”

Strictly speaking, that’s no true as the Channel 4 story pointed out. Wockhardt UK produces the animal insulin, but its products are used by some 1,500 to 2,000 patients every year. And that’s less than 0.5 percent of the estimated 421,000 people in the UK who rely on insulin.

Channel 4 News spoke to the major manufacturers, Sanofi, Novo Nordisk and Lilly. All of them make insulin in Europe.

The Healthcare Distribution Association (HDA) UK which represents medical suppliers in the UK wrote to the UK Government post the referendum in 2016 to warn of serious upsets to the supply chain should Brexit negotiations go wrong.

HDA UK said the UK medicines supply chain had “inbuilt resilience” and “flexibility”, and that they were aware of proposals by the government and manufacturers to develop plans for a buffer stock of all medicines.

A spokesperson for the Government said they were confident of reaching a deal, there were contingency plans in place to ensure no disruption to supplies.

Channel 4 News’ fact check conclusion is that as the companies and the Government don’t anticipate shortages, we should be okay.

Back to low-carb recipes and my tenuous attempt to link the two. If you follow a low-carb diet and you use insulin, in general you don’t need to take as much insulin. If shortages come, you’ll have more time to use your insulin while the powers-that-be attempt to sort out this almighty mess.

Cue plug for this blog and The Diabetes Diet! Is that distasteful of me?! Probably.