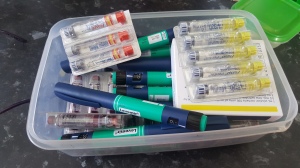 Sometimes a story pops up which serves as a timely reminder of how lucky we in the UK are (catastrophic, undemocratic political shenanigans which might lead to insulin shortages anyway notwithstanding)…

This week’s news feature that popped out to me was a BuzzFeed article about Millennial type 1s in the US, forced to come off their parents’ health insurance at the age of twenty-six. Insulin prices in the US tripled from 2002 to 2013 and a recent study found its average annual cost increased from $3,200 to $5,900 a year from 2012 to 2016. Unregulated capitalism—always a good thing, hmm?

Most Millennials, the article pointed out, have to contend with the long-felt after-effects of the 2008 financial crisis, debts left over from college or university and the gig economy where it is hard to get health insurance in the first place. Or there are jobs that don’t have insurance, the insurance doesn’t cover diabetes or the deductibles are so high, the insurance isn’t worth the paper it’s written on.

The reporter spoke with a number of twenty-six-year-olds forced into rationing insulin and using syringes and lancets repeatedly to try to keep costs down. One mentioned skipping meals so he didn’t need to take at least one dose a day, and another said her insurance didn’t cover the insulin she’d previously used. The one it sanctioned made her feel ill.

Why the age of twenty six? As the article states, outgrowing your parents’ health insurance has always been an issue for young adults with chronic health conditions. The Affordable Care Act of 2010 allowed them to stay on that insurance until they got to twenty-six—a universal deadline.

Even government-sponsored insurance is so “stupid expensive” one person quoted in the article said, it’s not worth it.

And what about job choices? Again, those featured in the article spoke about sacrificing what they really wanted to do for a job or career path that offered sufficient financial reward or great insurance in order to get the life-saving medication they need.

“It shouldn’t be this hard. You see other countries doing it and it’s not this hard. There’s no reason for this to be the way that it is.”