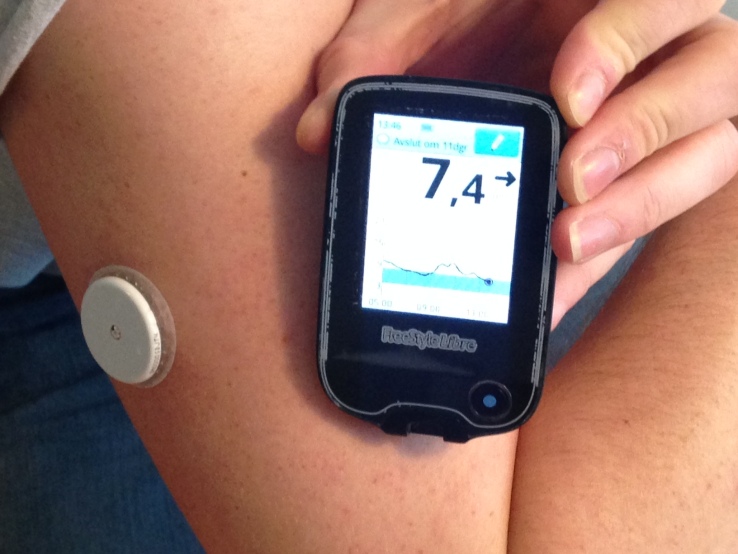 You find me, un-sensored and sad… Yes, I’ve completed two weeks on the FreeStyle Libre sensor and reader system, and now I’m back to finger pricks, at least temporarily.

At my last diabetes clinic appointment, my consultant* agreed that I’m a candidate for flash glucose monitoring (which is different from blood glucose testing, but more on that later) and sent me off with a 14-day sensor while I wait for bureaucracy to kick in.

So, what’s flash glucose monitoring like? For the uninitiated, the system comprises a sensor you wear on the back of your arm and a reader that can be used any time. Type 1 diabetes tends to encourage obsessive compulsive behaviour, and the FreeStyle Libre system facilitates that, though it’s no bad thing.

Where flash glucose monitoring differs from blood testing is that the sensor reads levels from interstitial fluid, so it lags about four and a half minutes behind blood glucose readings. If you drive, the DVLA requires you to do blood tests, rather than scans beforehand to avoid the risk of hypos while driving.

Parents love them because they can check children with type 1 diabetes while they sleep, able to work out if they are risk of a hypo, and they are also routinely prescribed for pregnant women who have diabetes as frequent testing makes it easier to maintain the tight control you need while growing a baby.

The accompanying app can be downloaded by others, who can gain access to your information if you give them permission. Again, something that is useful for parents although such scrutiny would have horrified the teenage diabetic me.

Here’s what I found:

After a day or so of overcoming the hesitation—I can’t do another test, I just did one an hour ago… Oh. Yes, I can—I averaged 11 scans a day, and about two blood tests usually at the same time to check accuracy and a few times because I was hypo.

Easy-peasy-lemon-squeezy! You can use the reader through clothing, it only takes a few seconds. It’s much easier than pulling out a meter, sticks and finger-pricker—especially when you’re out and about.

I had the odd bit of disparity—usually if my blood sugar was low, as the sensor lags behind blood glucose readings. However, most of the blood tests I did at the same time varied only by 0.1 o 0.2 mmol, and I did get hypo readings that registered at the same time.

No issues there. That thing stuck to me for the two weeks. I didn’t do any swimming in that time, so I can’t attest to how well it works in that setting. Nor did I try it out in the sauna/steam room as threatened—though one suggestion a fellow user came up with was using cling film to bind it onto your arm. The reader lasted on the battery charge for the full two weeks too.

There are lots of things that sell flash glucose monitoring to me—ease and frequency of testing two of them—but there are other super-useful components. One is the pattern tool. You can see where you have the most glucose variability and when you tend to have hypos. In the two-week period, I had (ahem) 17 low glucose events, most of them between 11am and 5pm and that corresponded with the time of day I have most glucose variability.

I’ve never been good at logging my blood tests. It just feels too much like hard work. I know you can download from your meter, but the checks I made on the flash glucose monitor gave me a clear idea of what happens. And, more importantly, some ideas of how to fix it.

The excess hypos may have been because of the half-marathon, which happened not long after I started my 14-day sensor and because I’ve been eating more carbs. As we say in the Diabetes Diet, more carbs mean more insulin. Bigger amounts of insulin mean bigger mistakes. A salutary reminder, then, that it’s back on the low-carb for me.

Thanks too, to Steven Morrison—my blog and book co-author’s son—who emailed me in detail about his own experiences using the FreeStyle Libre. He’s a convert too, and the cling-film tip came from him.

So when does my prescription come in? I’m now on a list for a short course at the hospital and once I’ve taken part in that, the organisers write to my doctor recommending she add sensors to my list of prescribed diabetes medications and gear. Fingers crossed, it doesn’t take too long.

Emma Baird is a type 1 diabetic and a writer with a keen interest in health and nutrition. She is the co-author of The Diabetes Diet and she runs her own blogging/PR business, and writes fiction in her spare time. Most importantly, she is the guardian of one very spoiled cat… View all posts by Emma